Unit Plan: Who Am I? 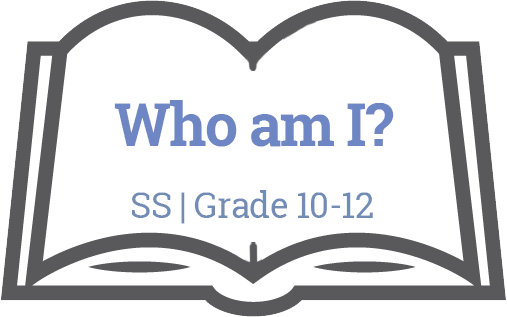 1) Write the following on the board and ask students what do they think it means? Not Inuk enough to be Inuk, not white enough to fit in.

2) Take their suggestions on how the statement impacts a person’s sense of self and identity.

3) What does this suggest about Kathleen’s identity and her ideas of being between two worlds?

If you have not already introduced identity, start with discussion on identity such as the following.

1) Brainstorm with students on the board where does identity mean? Answers may include: who I am, who I see myself as, etc.

2) Then ask students to think about where does identity come from. Answers may include; my family, school, my traditions, culture, language, faith, community friends, sports teams, how we see ourselves.

Ask older students: Who has the most influence over your identity? Is this fluid and how does it change? When do our peers influence our identity more than our families? Who Decides Identity?

a. how does our identity connect us with our family, friends and community and why is it important?

c. Can organizations such as sports teams, choirs, schools shape our identity? Are these forms of community?

d. Should other people?

5) Review if you have already discussed what identity means and how we form our identity, review with students where identity comes from. Tell students that as a class will be looking at three examples of how identity can impact the individual, community and a larger community such as a country or many different people.

1) Write the following on the board and ask students what do they think it means? ‘Not Inuk enough to be Inuk, not white enough to fit in’

2) Take their suggestions on how the statement impacts a person’s sense of self and identity. What does this suggest about Kathleen’s identity and her ideas of being between two worlds?

3) Introduce Kathleen Merritt, the Throat Singer who combines both Inuk an Irish ancestry into her music as a way of claiming her identity.

4) Play the video: ‘Not Inuk enough to be Inuk, not white enough to fit in‘. This musician is carving her own identity.

5) Either provide discussion questions as a handout or have students discuss in groups or as a whole class.

6) Understanding Throat Singing: Play the following video clips so that students have an understanding of Inuit/Inuk throat singing:

1) Josiah: Individual to Community: Discuss/review that Kathleen reclaimed her identity through her music and that she incorporated both of her ancestries. She defined her own identity. What happens when a group/organization or others try to define your identity?

2) Hand out the article: “Status Indian player barred from All Native sports event.”

3) Read the article to the class or read it aloud.

4) Go over the following with students: Status, non-status, racism, bloodline.

6) Worldview and Perspective on Identity: Use attached discussion guide. Find evidence or quotes in the article that illustrate the Heiltsuk point of view on identity? How does this differ from others?

“We saw it as extremely insulting,” Josiah’s father, Dr. Don Wilson, told CBC News. “It’s upholding that abhorrent notion that blood quantum or DNA or birth is what defines us as indigenous people, and it absolutely is not.”

“Wilson says the Heiltsuk First Nation has a long-standing tradition of adoption that tournament organizers must acknowledge.”

“We do not make a distinction between our children,” said Wilson.

“They’re all ours. We as the Heiltsuk Nation accept my son as one of us.

7) Find a quote where Josiah shares his identity as a Heiltsuk member?

“I was kinda shocked,” said Wilson, 20. “It hurts. It hurts. I’ve been part of the Heiltsuk tribe. I’ve lived up in Bella Bella, I’ve played basketball with the team, engaged with the community. Now this All Native committee is telling me I’m not native at all. I’m like, ‘What?’ I’d say [it’s] racist.” I’m black, I’m from the Caribbean, but at the same time I’m part of the Heiltsuk Nation. I consider myself one of them.”

8) Ask students what should the outcome be? Take suggestions and ideas. Share with students that Josiah won his human rights case.

9) Discussion: Lead students in a discussion that in the first example Kathleen was creating her own identity. For Josiah he was accepted by his community and the Canadian government as being Indigenous. The All Native Basketball tournament was trying to define Josiah.

10) Discuss with students the differing worldviews on what it means to be accepted by the community. Share the article.  What does Josiah’s situation highlight about identity and who defines somebody?

11) After discussion regarding community and how indigenous communities claim people as part of the community, ask students, what happens when nobody claims you or you can’t say where you are from.

12) Explain to students that this has recently happened in Canada.

13) Go over the controversy regarding author Joseph Boyden

14) Who Claims You? Explain the Controversy regarding Joseph Boyden and his identity. Controversy: APTN writer wrote article suggesting that Boyden heritage is questionable. Relate this back to the discussion regarding Kathleen and Isiah and how the community accepted them and this follows Indigenous protocols. The controversy for Boyden is if a community claimed him.

16) After video ask students what does the video and the statement Who Claims You Means and to think about this for the next day.

1) Review with class the ideas presented in Wab Kinew’s video.

2) What does the statement Who Claims You mean to them and to the Canadian Indigenous communities? How does this relate to Kathleen and Josiah’s cases?

3) Who is Boyden: Ask students whether they think Boyden is who he claims to be?

6) Use graphic organizer Seeing Both Sides to place evidence that the author uses to question Boyden’s identity.

7) Read with class “My Name is Joseph Boyden” and fill out the other side of the Seeing Both Sides Graphic Organizer that supports Boyden’s point of view about his identity.

8) Take a new poll on whether students support Boyden or not.